A better-than-expected jobs report and strong third-quarter earnings from some major companies drove stock prices higher for the fourth consecutive week. The S&P 500 and the Nasdaq reached closing highs while the other benchmark indexes listed here posted solid returns. The small caps of the Russell 2000 recorded the largest weekly gain, followed by the Nasdaq, the S&P 500, the Dow, and the Global Dow. Long-term bond prices rose, pulling yields lower as the yield on 10-year Treasuries fell 8 basis points. 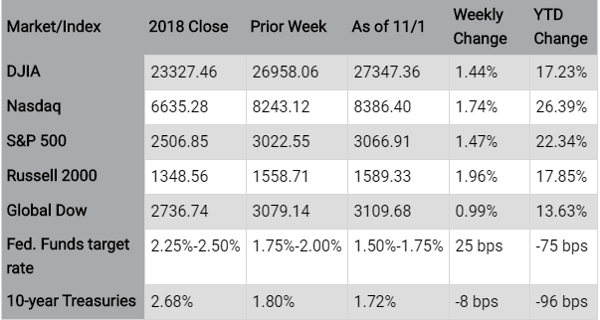 While the last week of October was full of economic information and reports, the first week of November is relatively calm. The goods and services trade report for September is available this week. The 2019 goods and services international trade deficit sat at $429 billion for January through August — about $28 billion higher than the deficit over the same eight-month period in 2018.

Data sources: News items are based on reports from multiple commonly available international news sources (i.e. wire services) and are independently verified when necessary with secondary sources such as government agencies, corporate press releases, or trade organizations. Market data: Based on data reported in WSJ Market Data Center (indexes); U.S. Treasury (Treasury yields); U.S. Energy Information Administration/Bloomberg.com Market Data (oil spot price, WTI Cushing, OK); www.goldprice.org (spot gold/silver); Oanda/FX Street (currency exchange rates). All information is based on sources deemed reliable, but no warranty or guarantee is made as to its accuracy or completeness. Neither the information nor any opinion expressed herein constitutes a solicitation for the purchase or sale of any securities, and should not be relied on as financial advice. Past performance is no guarantee of future results. All investing involves risk, including the potential loss of principal, and there can be no guarantee that any investing strategy will be successful.